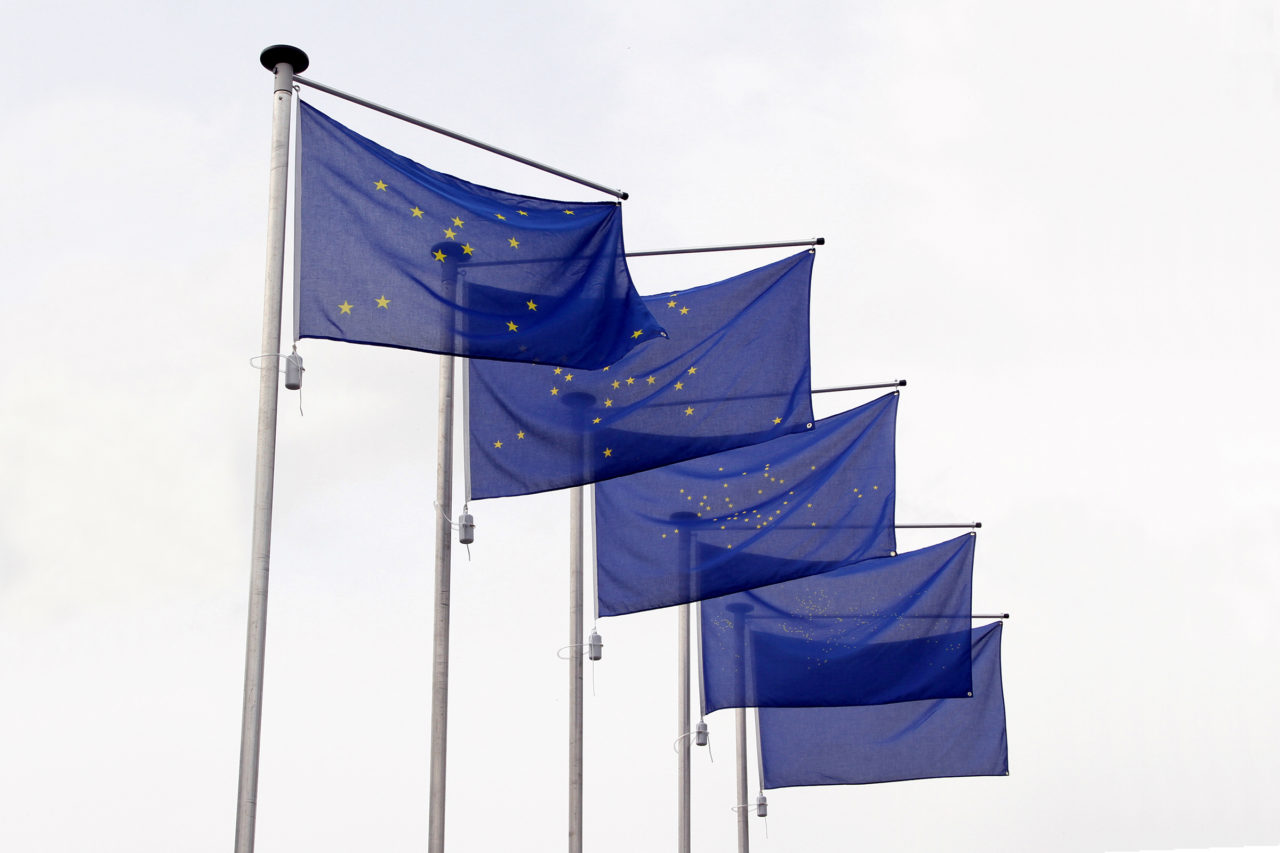 On 9 May ‘Europe Day’ is celebrated. On that day in 2006 a new European flag was simultaneously unfurled in over 50 cultural institutions throughout the European Union. Vanden Eynde’s 'Europe: Mutadis Mutandis' is a series of six flags that challenges the EU motto ‘In Varietate Concordia’ (‘United in Diversity’) and presents a more realistic alternative to it. The stars, which are set in a perfect circle on the official EU flag, are arranged in a pattern that corresponds to the geographical locations of the capitals of the various member countries, creating an abstract star-filled sky and breaking up the circle. The subsequent editions zoom further and further out to include the capitals of those countries aspiring to join the EU, followed by all 193 capitals of the member states of the United Nations. The series ends with a clear blue flag with no stars at all, no more capitals, no more borders. What remains is an open sky, the flag of the blue planet, our Earth. The work questions both the relevance of closed borders and constant geographical expansions. It invites us to consider the possibilities of Utopian Global Governance.

In 2016 Vanden Eynde produced a prequel, adding a new flag at the start of the series that goes back in time but possibly, mutadis mutandis, into the future as well. This flag bears a single yellow star in the centre of a blue field, and the history of that design and the idea that it might have inspired the design of the first European flag is mindboggling.

In 1810 the single-star flag was flown for the first time to represent the short-lived self-declared Republic of West Florida (that area is now part of Louisiana, US). In 1836 it was adopted by the Republic of Texas, which is often nicknamed the ‘lone star state’. In the 1860s, when seven southern states seceded from the rest of the United States, the ‘Bonny Blue flag’, as it came to be known, became the first flag of the Confederacy. The rebel states were all heavily dependent on slave labour. New Orleans had the biggest slave market in America and by 1860, most the enslaved humans sold there were from the Kingdom of Kongo. The abolition of slavery threatened to destroy their economies and way of life. The secession led to the American Civil War.

In 1876 the history of the flag took a remarkable turn when it became the banner of the ostensibly philanthropic and humanitarian International African Association set up by Leopold II of Belgium. Two years later the IAA was succeeded by the International Association of the Congo, which kept the flag. In 1885, at the Berlin Conference, where Africa was treated like a colonial cake to be cut up and divided between the western powers, Leopold negotiated as his own private property a vast swathe of Central Africa which he named the Congo Free State, and it too used the same flag. Leopold’s brutal exploitation of the local population and the appalling atrocities perpetrated against them in his pursuit of personal profit eventually became public knowledge. In the face of international outrage, in 1908 the Belgian State took over Leopold’s private fiefdom, which was renamed the Belgian Congo, and again retained the flag. From that moment the single star on the plain blue field was the official flag of the Belgian Congo until Congo gained independence in 1960 (!).

In 1955 the European flag was introduced. The exact design – 12 yellow stars, centred in a circle upon a blue background – was finalised by Paul M. G. Lévy, a Belgian journalist and professor and Director of Information at the Council of Europe, on the basis of a proposal submitted by Arsène Heitz, who also worked for the Council. Later, in 1987, Heitz suggested that the inspiration for the design was religious, drawn from the biblical Revelation to John, in which the Virgin in the form of the Woman of the Apocalypse is described as having on her head a crown of twelve stars, although Lévy disputed this. And so, the link between Congo, the United States and Europe comes full circle.