The sudden, renewed interest over the last few years for explicitly on nature oriented 'movements' like Land Art, Eco Art and Bio Art, as well as for the relationship between art and nature in general, is remarkable but certainly not surprising. Viewed superficially, it could be accounted for by the return to the small-scale, the collective and to nature, to the rediscovery of the original, the primal and to an urge for sustainability. It concerns a holding position, a reconsideration of our ethical values, based on the realization that our earth’s resources are not inexhaustible.
Seen from a philosophical-sociological perspective, more specifically, in the light of Bruno Latour’s constructivist ideas, a more nuanced view can be formulated. Increasing numbers of researchers, including artists, are working within different disciplines to redefine the concept of nature. Within this redefinition, nature is considered as an ecosystem of which people and technology are integral parts. In this so-called Anthropocene era, proposed as a working concept at the turn of the new millennium, the earth and its atmosphere suffer the impact of human activity, and so the notion of an antithesis between culture and nature is no longer valid, thus calling into question the basis of modernity. Based on this understanding, new forms of knowledge are developing, with a new world vision gradually arising, in which the traditional divisions between nature and culture, object and subject will dissolve. Collaboration between the sciences and the humanities, including the arts, lies at the heart of this development. The Antropocene perspective is increasingly gaining ground, such that we may speak of a "Generation Antropocene " (Robert Macfarlane , The Guardian , April 1, 2016 ). 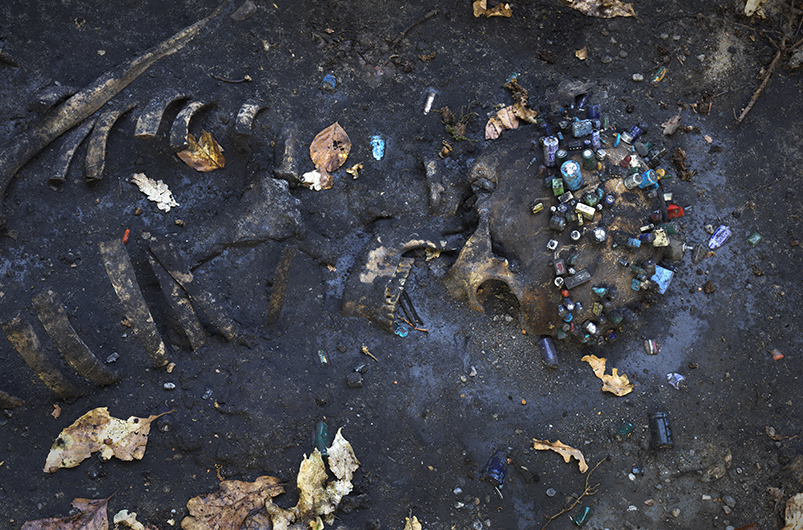 In the Anthropocene era, the connection between humans and the earth must be acknowledged once again, not as a nostalgic return to nature, an idea propagated since the Romantic movement, but as a continuing evolution of organisms, objects and matter, which are connected to one another within
complex networks. An open vision of art as a sensitive, aesthetic, narrative and performative form of knowledge can teach us how to deal with this enormous challenge.
The exhibition Disruption - Remapping Nature focusses on a group of European artists, in whose bodies of work the concept of nature lies at the heart. From the Antropocene framework these at first sight so different artistic practices each shed their light individually on the way contemporary man perceives nature, defines it and relates to it.
The challenge in this exhibition is not only in bringing together new works by a specific group of artists on a highly topical theme, but also in presenting these reflections on art and nature in the "natural" context of De Oude Warande. Where does the concept of nature end and does the notion of culture begin? In the Antropocene perspective, there are no boundaries. All this is a single entity.

Disruption - Remapping Nature focusses on a group of European artists, in whose bodies of work the concept of nature lies at the heart. The different artistic practices each shed their light individually on the way contemporary man perceives nature, defines it and relates to it.