Genetology or science of first things is a self invented[1] science creating an opposition for the existing dominant science of last things, Eschatology. Genetology’s main area of research is our fascination with time and its consequences: How will we look back to the past in the future? What will remain of the present?

Genetology is a post-apocalyptic science which collects imaginary pieces of a puzzle putting back together again a possible future history. Eschatology preludes Genetology. In general it studies the human nature to stimulate change, manipulate evolution and alter the world in order to create something new.

The interest in a future history and how to create it or preserve it seems to be present in most fields of study and cultural practices. Since it is not recognised as such, I decided to analyze and visualize this transdisciplinary principle in order to give it viability as a new means of knowledge production. To be able to create a better understanding of Genetology, its definitions, conceptual outlines and working method is the basis of my research project.

In 2006 I started to collect data on a weblog, which functions as an online sketchbook where, besides my own work, other artworks, events in history, scientific discoveries, intellectual discourse and philosophical explorations are assembled in order to be able to define Genetology. I categorise the content within the different existing branches of science since they represent our best attempt to separate and encapsulate all existing knowledge.

Since 2009 I published several quires of a large volume book and organised several exhibitions around Genetology within the framework of Enough Room for Space.

Foucault invented his 'order of things' to be able to create a genealogy of knowledge.[2] He died however before he could witness humanities obsession with the present in the 20th century. With my research I want to prove and continue his assumptions by gathering enough evidence to conclude that after the present, the episteme of today is the future, the final frontier. 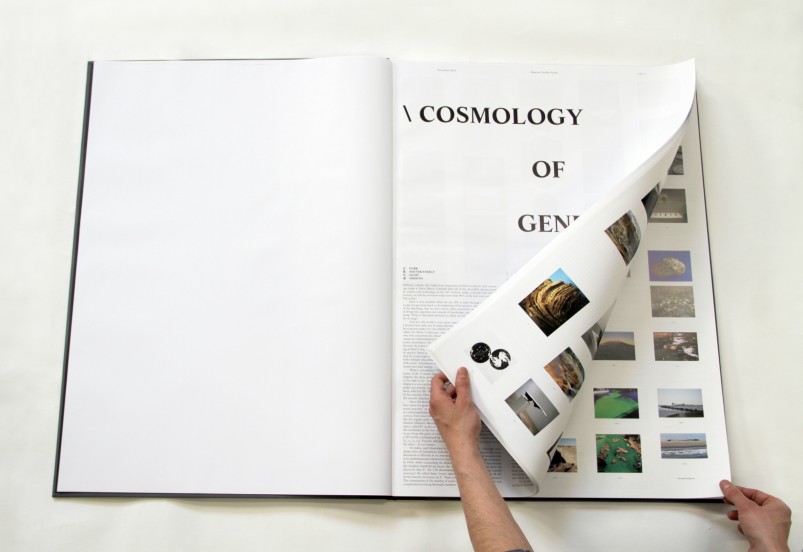 [1] A few years after I bought the domain name genetology.net it appeared on the Internet as part of the title of a book by J. Bertani Genetology, or, The reproduction of human beauty & excellence, considered (1864). The two only links on the Internet to prove the existence of the book are made by ImportBot and WorkBot, two robots. Could this be the first time that a robot invents a book? I never found the real one.
In the scientific world it is currently used to describe the fusion between Genetics and Genealogy. Or, how can we manipulate the DNA of our future generations? How can we (re)write history? The word Genetology however still does not appear in any known dictionary worldwide.

[2] Michel Foucault used the term episteme in his work Les Mots et les Choses. Une archéologie des sciences humaines (1966) to mean the historical a priori that grounds knowledge and its discourses and thus represents the condition of their possibility within a particular epoch.