DAMN°35 Magazine / Beginning with the Future

Beginning with the Future
Maarten Vanden Eynde toys with history

Mankind has always been fascinated by the concept of the end of the world, leading to an explosion of science fiction and apocalyptic tales. Science, too, seems to be interested in this topic. Having noticed the existence of a Science of Last Things, aka Eschatology, but not a Science of First Things, Belgian visual artist Maarten Vanden Eynde saw fit to coin the term Genetology. Overlapping various domains of study, this ‘post-apocalyptic science’ is also the theoretical backbone of his practice, in which he veritably confuses the archaeological finds of the future.

On one of the top floors of a building in Genk's Waterschei, the defunct Art Deco mining site where the roving European biennial Manifesta 9 takes place, lies a patchwork of melted plastic. Plastic Reef, as the work is called, is a sculpture by visual artist Maarten Vanden Eynde. It is made from plastic debris found floating in the ocean. Plastic thrown in the sea and in canals is drawn in by gulf streams and ends up in one of five gyres, each the size of entire continents. Being shocked by this phenomenon that was not so known at the time, Vanden Eynde decided to join the ship Sea Dragon in 2010, to see the North Atlantic Gyre with his own eyes. There he collected heaps of plastic and had samples sent home. The artist then started experimenting with the material. "When I began melting the plastic, it took on organic forms. Pretty soon, I noticed the resemblance to coral reefs. I thought it was a beautiful analogy, because coral reefs also disappear worldwide." For him, this is a way to process the debris and make something beautiful out of it again. The size of the work is also impressive. "Because the ecological problem is so big, the work had to be monumental", he explains. Just like the reefs, the sculpture increases every time it is shown in a new exhibition. In its present state at Manifesta, it weighs one ton and measures four metres by five-and-a-half. "The work’s sculptural dimension is very important", Vanden Eynde hastens to add. "While making the piece, it was as much about form and colour as about pollution. The sculpture must also work on its own." By now, Vanden Eynde has already visited four of the five gyres, as he wants to have a representative image of the oceans’ pollution. When we met the artist, he was about to leave for the Indian Ocean to collect samples there as well, and will then finish another on-going work referring to the same subject matter. Made as a series of five, 1000 Miles Away From Home consists of a glass snow globe filled with plastic particles from the gyres, giving the classical tourist souvenir an ironic twist. 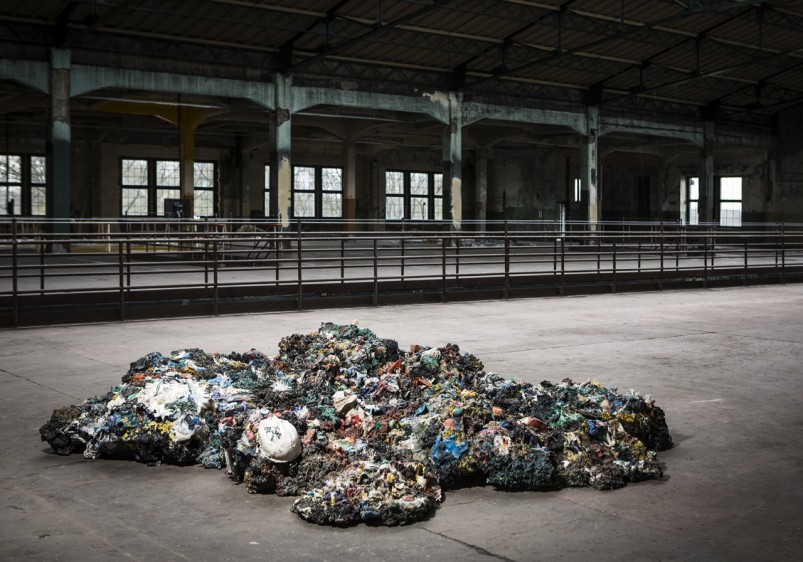 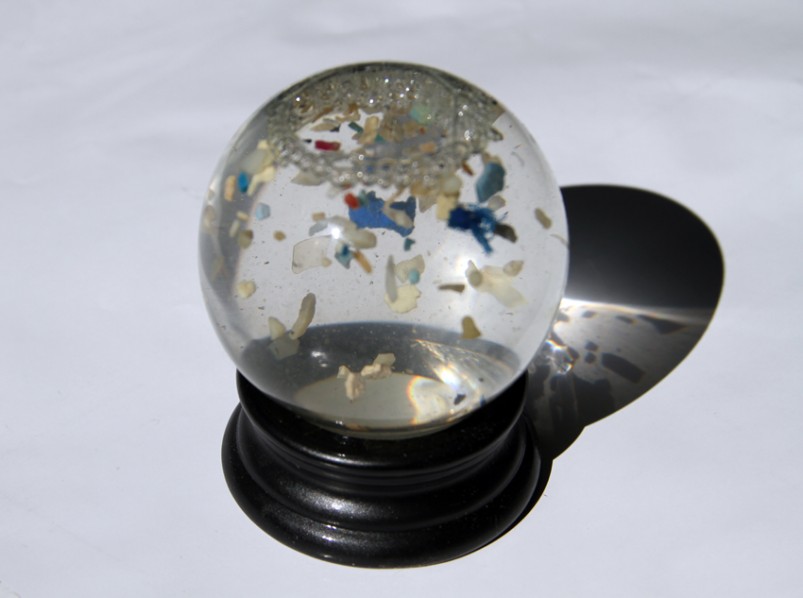 Plastic Reef is, like the majority of Vanden Eynde's work, an example of Genetology. For his thesis at the Rietveld Academie in Amsterdam, the artist did a lot of research on 'the end of the world'. It made him slightly depressed until he realised that it might also imply a new beginning. Hence, the term he invented. "Genetology is a kind of nostalgic science fiction. It is about the way we will look back to the past in the future", he explains. In order to do that, Vanden Eynde uses remnants from our society. "I try to imagine how people will use the remaining pieces of the puzzle to reconstruct the whole." In doing so, he adheres to a poetical rewriting of history, with touches of the absurd. Homo Stupidus Stupidus, for example, is a human skeleton taken apart and reassembled in a way that disregards classic human anatomy. With this work, he pokes fun at the hypothetic guesswork in which archaeological museums exhibit vases that have been reconstructed on the basis of only a few shards. "Homo Stupidus Stupidus is a form of historical falsification", he smiles. "But the same could be said about history-writing in general. It is also subjective, depending on a personal interpretation of facts." 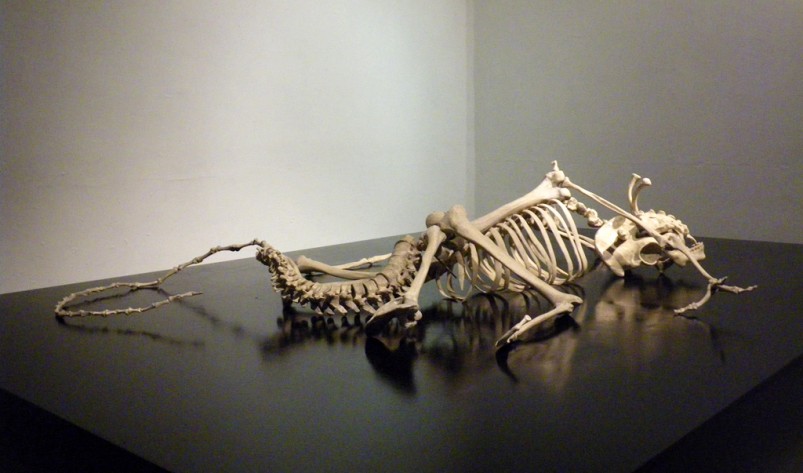 When reading that the Ikea catalogue was the mostprinted book in the world in 2005, even outnumbering the Bible, Vanden Eynde was stunned. Hence, for an exhibition at the University of Ghent, he integrated an Ikea catalogue into the precious Dominican book reserves, beside a copy of the Bible from 1556 A.D. The Swedish furniture giant often recurs in his work. In 2005, he broke an Ikea teacup into smithereens, restoring it afterwards with the help of experts at the Villa Giulia National Museum in Rome. The result is a form of contemporary archaeology. Sometimes the artist also wants to give future archaeologists a hand. That same year, he managed to jump over the fence of Il Foro Romanum, secretly hiding an Ikea teacup under the foundations. The piece will hopefully be discovered one day. "If future archaeologists make excavations, the chances are reasonable that when arriving at our society’s layer, they will find a piece of Ikea", Vanden Eynde says without blinking. Besides falsifying archaeology, he also undertakes steps to preserve it. After visiting factories on the verge of closure in Birmingham in 2007, he made the series Industrial Evolution. He photographed, in pairs, a hundred items from the last 25 remaining manufacturing companies, evoking Noah’s Ark. Hence, the series forms a tribute to a past industry and can be regarded as a kind of industrial archaeology. Strangely enough, there are always small differences between objects that are seemingly identical, which only become apparent when looked at closely. "That shows the failure of industrial revolution and the impossibility to reproduce objects exactly", he remarks. The artist is also interested in contemporary building materials. Having been asked to make an intervention in the new SD Worx offices in the Belgian city of Hasselt, he traced the origin of every single material used to construct the building. 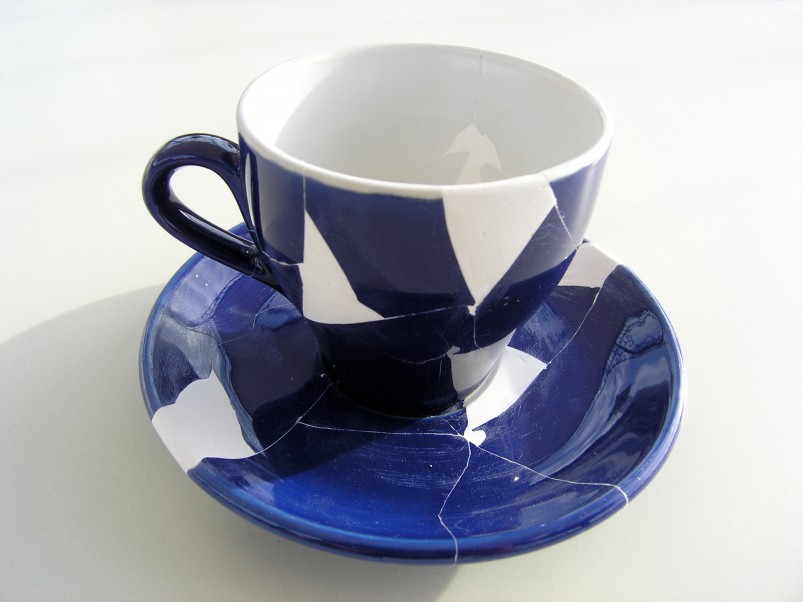 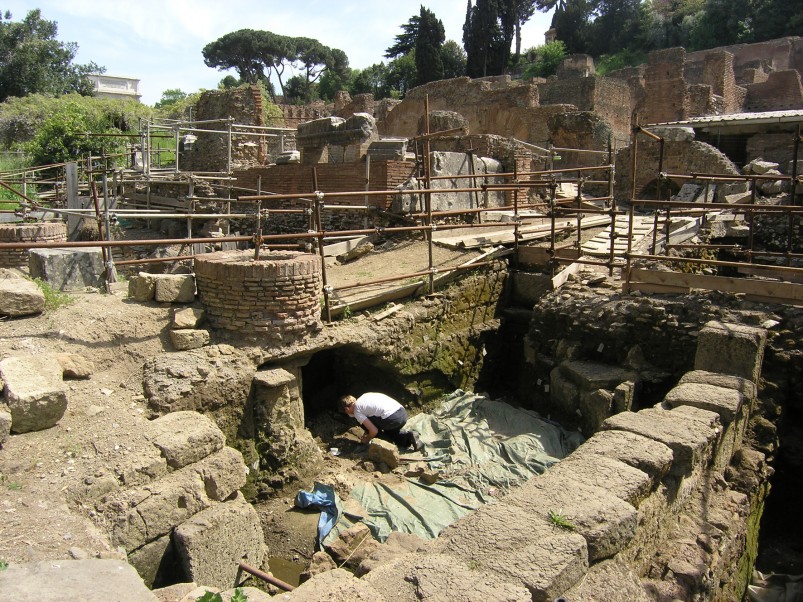 A GENTLE KICK IN THE BUTT

Besides archaeology, geology also plays an important role in Vanden Eynde's Genetology. Taking part in a seminar for the Generali Group, he realised a 4.5 metre high permanent sculpture, a succession of layers of materials such as wood, copper, bronze, steel, etc., paralleling the various material eras or geological successions. "The layers follow each other quicker and quicker, referring to the idea of singularity which states that developments and inventions always happen faster, up until we can’t comprehend them anymore." The top of the sculpture was formed of plastic, the result of melting the champagne glasses from the opening reception. "The work was a gentle kick in the butt", Vanden Eynde smiles. "I wanted to show these insurance guys their responsibility, since they are now working on the layer for future generations." And off he goes to explore another gyre. ‹ 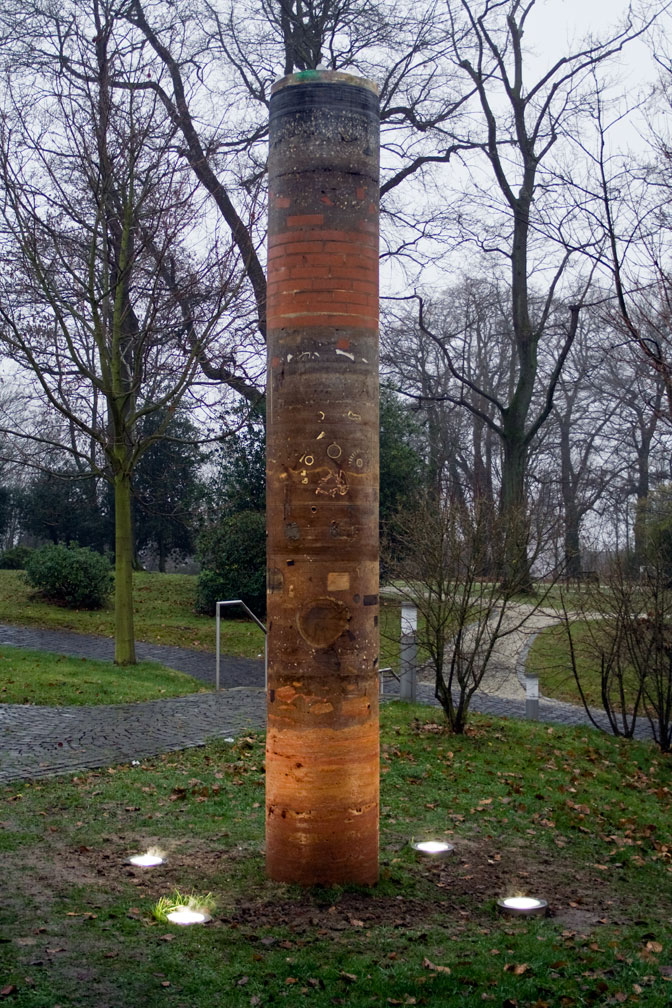